Football, Family, and a Future: Local Polynesian Coach reflects on ‘In Football We Trust’ 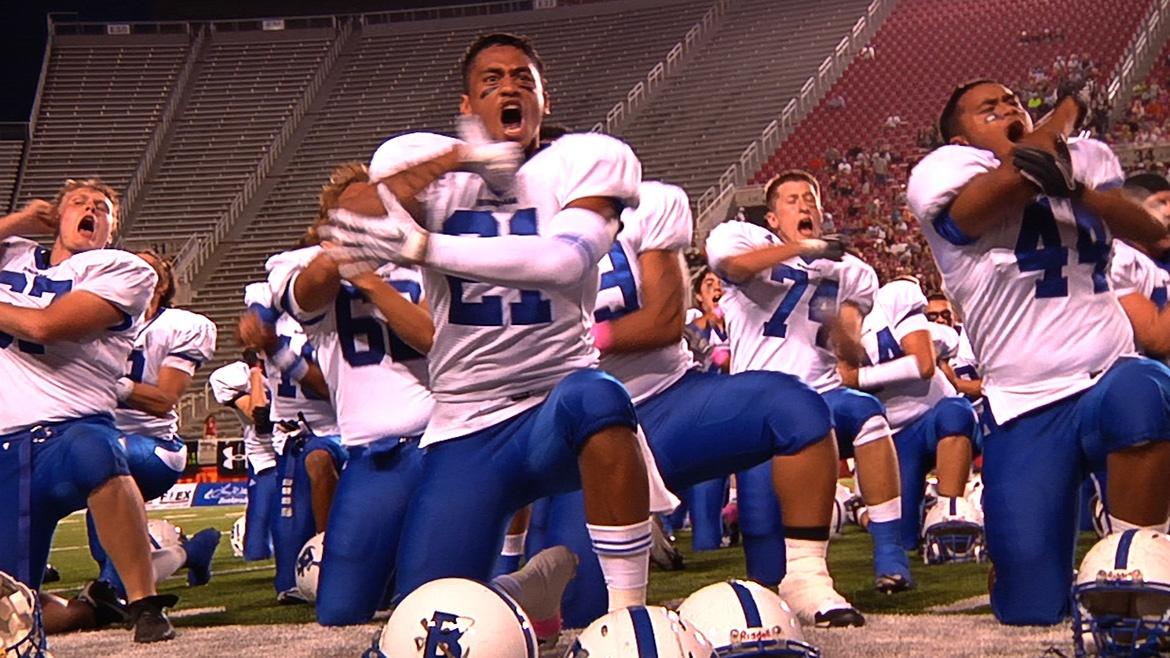 Polynesians are 28 times more likely to reach the NFL than any other ethnic group.

That’s according to “In Football We Trust,” a new documentary that airs tonight on Independent Lens. The documentary follows four Polynesian high school football players in Utah who hope football will be their ticket to overcoming poverty and other obstacles.

Earlier this month as part of Indie Lens Pop-Up, a monthly documentary screening series, KCPT hosted a screening and discussion of “In Football We Trust.” Fort Osage High School coach Simo Atagi and several Polynesian student athletes spoke after the film about what football means to them and their goals.

Though the students didn’t relate to all of the challenges facing the young men in the documentary, they felt “In Football We Trust,” captured their culture’s emphasis on hard work and family.

Coach Atagi shared his thoughts on the film and what football teaches his students on and off the field.

Tell me about your football career and your job as a coach for Fort Osage.

I played football at Fort Osage High School in Independence, Missouri. As a player, I was named First Team All State Offensive Lineman, First Team All Metro Offensive Lineman, and played in the Missouri vs. Kansas All-Star Game. Following high school I continued my education and football career at Missouri Southern State University. When I graduated from there, I coached at Neosho High School and Smithville High School before I returned to Fort Osage. This year at Fort Osage, we won the Class 5 Missouri State Championship.

What did you think about “In Football We Trust”? What issues in the film reflect what you’ve experienced as both a player and a coach?

“In Football We Trust” gives an interesting insight into the lives of a few Polynesian student-athletes. The excitement of the games, the support of your family and community, and the recruiting process were all very nostalgic for me as a former player. As a coach, I see the struggles that students have to go through to be successful students and athletes, but we try to catch them before they get to the extremes that were illustrated in “In Football We Trust”.

What is the legacy or some of the history of Samoan student athletes at Fort Osage?

The film talked about there being a strong connection between football and Polynesian warrior traditions. Do you agree or disagree with this?

I would agree with that. The warrior tradition lends itself to contact sports like football. We are tough, but there are other things that go into it also. For example, people that I deal with in my community are hard working and passionate people. Those are two of the most important qualities of good football players. If you genuinely care about what you are doing, and are willing to work hard to be successful, it is very difficult to fail. Luckily, there are also some genetic factors that play into our athletic abilities. The combination of all of these factors definitely leads to the strong connection between football and our Polynesian culture.

When you watch “In Football We Trust” I want to you to remember that these student athletes are just a very small sampling of the Polynesian student athletes in the United States. I want you to remember that we are a family-oriented community. My community holds our culture in high regard. We have strong roots in our past. You will see us celebrating our culture in parks around the Kansas City area. You will see us on Friday nights playing football for your local high school teams. You will see us on Saturdays on college and little league fields. You will see some of us on Sundays on the field at Arrowhead. We have our struggles, but we also have our triumphs. That is exactly what happens in our homes, our classrooms, and communities in KC and everywhere else, we have our struggles and we have our triumphs. That is why thousands of Polynesian coaches and parents, like myself, are trying to teach our kids how to push through struggles to make it to triumphs.

Anything else that I haven’t asked you that you think is important for people to know?

To all the Polynesian student athletes that see this,

1. Enjoy your time as a student athlete. I loved it. I love football. I can’t imagine a life where I didn’t compete in this beautiful game. It is a great metaphor for life. You will learn so much about yourself. You will develop relationships with people you never would have otherwise. You will make memories that will never forget.

2. Football ends for everyone. It is just a question of when, so use it to learn life skills, get an education, and make money if you can. Even if you make millions, it will end at some point. Use your athletic skills to set yourself up for life after football.

3. Think about the people who came before you in your family. What did they do to set the stage for you? Now think about yourself. What will you do to push through the struggles in your life so that you can see the triumphs for yourself and those who come after you? If your past is great, build on it. If your past is not, put it in the right direction. It is up to you to set the stage for the next generation of your family.

“In Football We Trust” airs at 9pm tonight on KCPT.