On the centennial of Charlie “Bird” Parker’s birth, Kansas City PBS is proud to present a documentary that looks back at the years Bird spent in Kansas City and his lasting legacy on the Kansas City jazz scene. Bird: Not Out of Nowhere features rarely seen archival footage of Parker, interviews with musicians and historians, and live performances from some of Kansas City’s most talented jazz musicians. 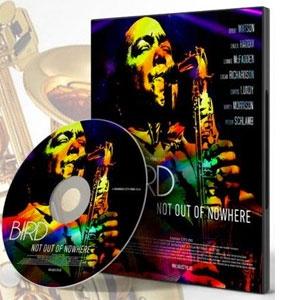 Donate and receive this program on, DVD, our Bird Lives Commemorative T-Shirt, Bird at 100: CD and more.

Watch Online: Bird: Not Out Of Nowhere

Luckily for the musical world, Charlie Parker grew up in Kansas City during the ’20s and ’30s. A destination for a low moral character, Kansas City had an unquenching lust for booze, women, drugs, and the music that accompanied such vices: Jazz.

It was from that music scene where Charlie Parker cut his chops in late-night jam sessions, most famously at the Reno Club on 12th where Jo Jones, disgusted with 16-year-old Charlie’s inability to keep up, threw a cymbal at his feet, prompting an embarrassed young Charlie to sulk back home determined to one day “show those cats.” It was his elementary school music teacher calling him and his friends “Yardbirds” that set in motion what would one day become his famous moniker, "Bird." And it was a car accident on a Missouri backroad that gave Charlie both a new horn and a taste for heroin. Before he ever played bebop on New York's famed 52nd Street, Charlie Parker was Bird.

Directed and produced by Emmy Award-winner Brad Austin (Me, Dorothy and This Road to Oz; In Situ), Bird: Not Out of Nowhere takes an in-depth look at the 21 years Parker spent in Kansas City and his lasting impression on present-day Kansas City jazz. The documentary features rarely-seen archival footage and includes interviews with musicians and historians also offering live performances from some of Kansas City’s most talented jazz musicians, including Chuck Haddix, Bobby Watson and more.

Born in 1920, Parker grew up in Kansas City, Kansas, near Westport during the height of Prohibition. At the age of 11, he picked up the saxophone, laying the foundation of his musical career. It was in the Kansas City music scene where he cut his chops on late-night performances, becoming a renowned soloist, improvisationalist and leading figure in the development of bebop alongside Dizzy Gillespie. As his mastery and influence on jazz grew, Parker’s lifestyle would ultimately cement his legacy and his demise.

Local Support
This program was made possible with generous support from:
Presenting Sponsor

Charlie Parker, also known as bird, is a legendary jazz musician who has influenced many of today's genres and helped develop the genre bebop. Bebop is a subgenre of jazz that is recognized as being difficult to dance to, but Bird said he didn't care if people danced to his music, because he was an artist.